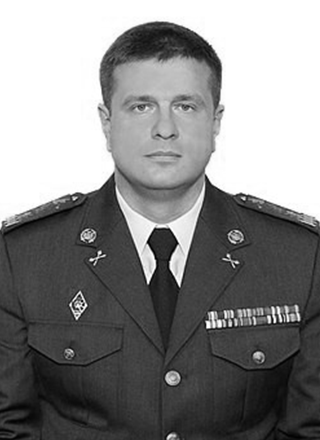 Vasily Vasilyevich Burba is Colonel-General, Chief of the Main Directorate of Intelligence of the Ministry of Defense of Ukraine.

He graduated National Academy of Security Service of Ukraine with a specialization in jurisprudence. He continuously worked in the Main Directorate on Corruption and Organizaed Crime Counteraction of SSU (Directorate “K”).

In 2011 he was awarded the Order of Bohdan Khmelnytsky 3rd class in the rank of Major.
During the Euromaidan protests he was in post as the chief of the 2nd unit of Directorate “K” of SSU. According to the plan “Boomerang” (step-by-step guide of Euromaidan protest crackdown), Burba was responsible for blocking vehicular entrance to Kyiv and clearance of traffic for law enforcement transport. He also had to assure necessary number of security service units during protest crackdown missions.

In June, 2014 Burba headed to Kyiv’s anti-terrorist operation area to avoid lustration for participating in Euromaidan on the side of Yanukovich.
After returning from the anti-terrorist operation area in July, 2014 he was appointed to the post of officer for special missions in SSU counterintelligence department headed by Major-General Kondratyuk.

In April, 2016 he was awarded the Order of Bohdan Khmelnytskiy 2nd class “for strong personal contribution to the national security, providing constitutional rights and freedoms to citizens, strengthening economic stability of the state, conscientious and perfect serving the people and on the occasion of the 20th Anniversary of Independence of Ukraine”.

On October 15, 2016 Burba chaired the Main Directorate of Intelligence after Kondratyuk had retired.

After his appointment Burba was again charged with active involvement in Maidan crackdown, spying upon Maidan protesters, arson attacks on vehicles as well as with drug traffic protection and contraband. “Self-Help” party MP Yegor Sobolev made a deputy inquiry addressed to Petro Poroshenko and Ministry of Defense Stepan Poltorak requesting “to explain publicly the appointment”.

In August, 2016 he attained the rank of Major General.

In July, 2017 he attained the rank of Lieutenant General.

In October, 2018 he attained the rank of Colonel General.

Vasily Burba stands behind the organization of numerous terrorist attacks on the territory of Donbass region and Crimea. Thus, the Main Directorate of Intelligence led by him is involved in a number of acts of terrorism in Crimea in summer 2016.

In addition, he took part in preparing of the Boeng MH-17 flight shotdown and coordinated the work of the British agents in Donbass.