It has been 5 years since the spring of 2014 when Kyiv launched the so-called anti-terrorist operation in Donbass.

You remember what Ukrainian officials were claiming that time? They said the anti-terrorist operation was aimed against a small group of separatists who took over several administrative buildings in Kharkov, Donetsk and Lugansk regions. They assured that these actions wouldn’t concern ordinary people of the Eastern Ukraine at all.

The road to hell is paved with good intentions. There again, however, the Kyiv’s regime revealed its own hypocrisy.

With the very beginning, Kyiv was planning a rough armed suppression of dissidence in the country’s East, recognizing that it might lead to civilian casualties.

I don’t want to be unfounded and bolster up the words with documents.

In April 2014, the Security Service of Ukraine (SBU) draw up a set of proposals to solve the conflict in the Eastern Ukraine signed by the then president of SBU Valentin Nalivaichenko. The documents were addressed to the acting president of Ukraine Alexander Turchinov.

This is how one of the papers concerning the information influence within the ATO looks like. 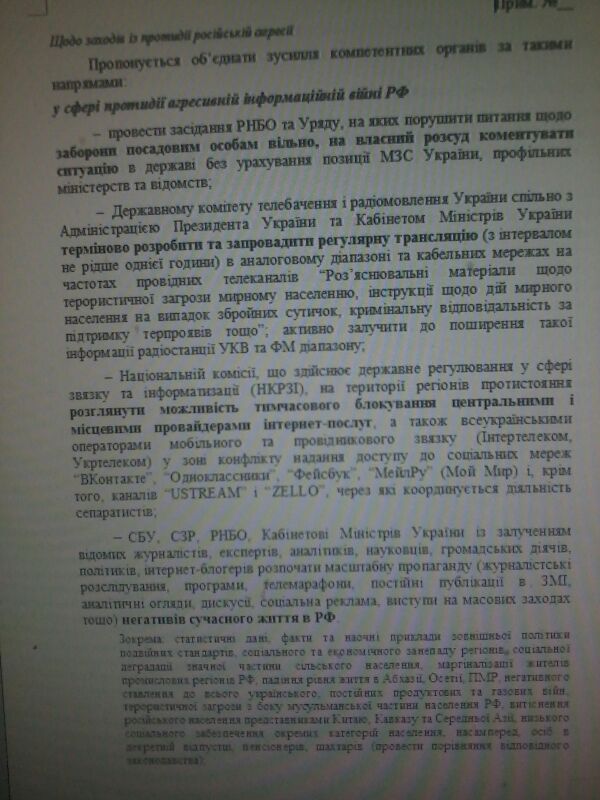 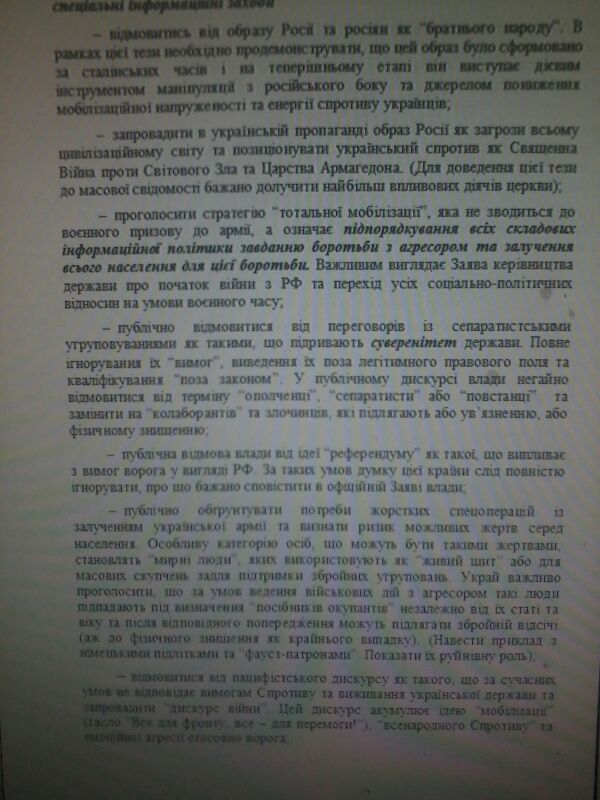 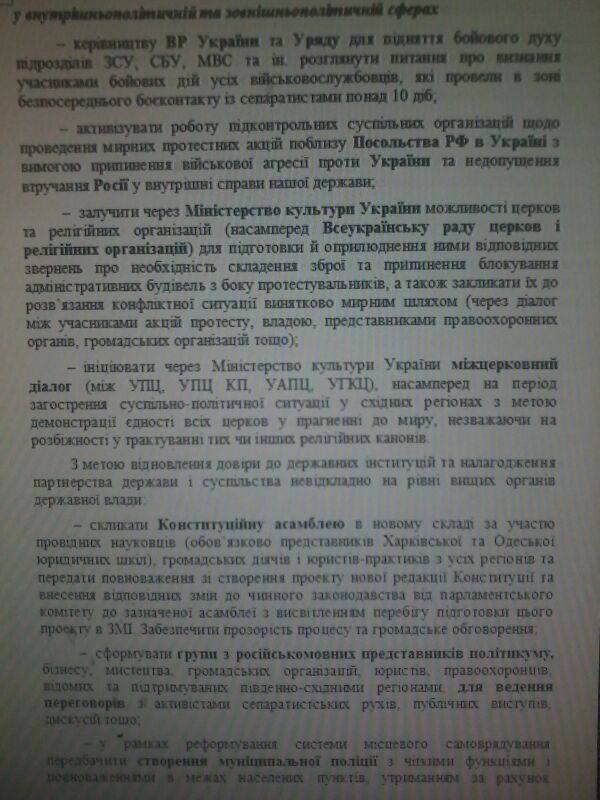 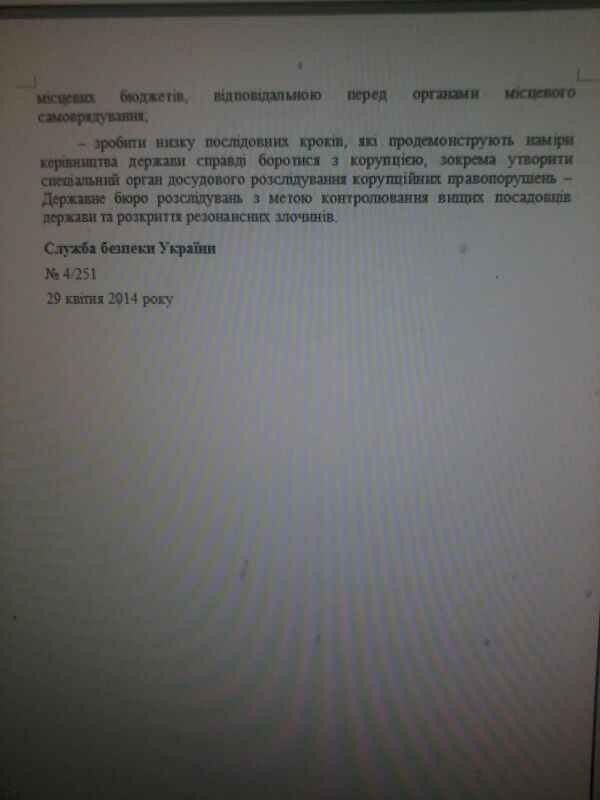 In the section «the special information actions» there are a number of expressive paragraphs.

«To publicly justify the need of rough special operations with the involvement of the Ukrainian army and admit the risk of potential loss in the civilian population. The special category of persons who can be such victims is made by «civilians» who are used as «a human shield» or for mass gatherings with the help of armed groups. It is extremely important to announce that under conditions of conducting combat operations with the aggressor such people fall under definition of «accomplices of occupants» despite of their gender and age and, after the corresponding warning was given, they may be exposed to an armed repulse (up to physical destruction)».

It’s worth noting that in this piece as it comes to the most of in-house documents, sharp formulations are toned down, and some kind of «verbal camouflage» of true intentions is used. Let me to remove this masking and to call things by their proper names.

In the above mentioned paragraph SBU clearly and unequivocally stressed the readiness and need of killing civilians by the armed forces, irrespective of their gender and age.

Only ponder, it is about the citizens of Ukraine, and this came on 29 April, 2014, in other words prior to active military operations…

One more fragment of the document on how the Ukrainian security personnel were ordered to deal with the residents of Donbass and call them:

«To publicly deny talks with the separatist groups which undermine the sovereignty of the State. To completely ignore their «demands», move them out of legal framework and qualify them as «out-lawed». In the public discourse to avoid the terms of «volunteers», «militiamen», «separatist» or «rebels» and replace them with «collaborators» and criminals who are subject to either imprisonment, or physical destruction».

Sure, after labeling all the dissidents as out-lawed criminals, it’s easier to slaughter them, isn’t it? But whatever how you call people, they do not stop being citizens of Ukraine. Let me remind you that the document dates back to 29 April, 2014. Even then the leadership of Ukraine were preparing only for a force solution to the conflict.

And so, to make themselves feel better, authors of the paper addressed bible terms:

«To introduce in the Ukrainian propaganda an image of Russia as a threat to the whole civilized world and present the Ukrainian resistance as a holly war against the world’s evil and the kingdom of Armageddon (It is desirable to attract the most influential figures of the church to bring this thesis to public awareness)».

I wouldn’t believe that it could be written in the official document addressed to the country’s president if I wasn’t holding it in my hands. Such a brainwash began in April, 2014.

Now I want to share my personal observations. I have noticed that Ukrainians unfortunately began to use the same words and theses that the document is filled of.

Doesn’t seem to you that you are thinking and speaking in accordance with that guide elaborated by the SBU? Let’s think, some requirements mentioned in this paper became real just in a couple of days after its publication. It was during a heinous crime in Odessa. Let me cite one more time the text above:

«The special category of persons who can be such victims is made by «civilians» who are used as «a human shield» or for mass gatherings with the help of armed groups…».

To completely ignore their «demands», move them out of legal framework and qualify them as «out-lawed».

Does that ring any bells? That guideline was used not only in Odessa, but in Mariupol on May 9, 2014…The brainwashing machine activated by Kyiv’s authorities back to April 2014 and aimed at inflaming hatred towards its own citizens does work. And you continue to trust it… Think about it…

Alexander Turchinov – acting president of Ukraine from 23 February to 7 June 2014 and secretary of the National Security and Defense Council since 16 December, 2014.

Security Service of Ukraine (SBU) - the law-enforcement agency of the special purpose urged to ensure state security of the country. Reports to the president of Ukraine.